“We expected a wonderful trip with fine concerts. What we got was a life-changing experience for the chorus and audience,” Reuben Reynolds III, Director, Boston Gay Men’s Chorus

This article was originally published in our 2005-2006 Tour Notes.

When the Boston Gay Men’s Chorus went on tour in June 2005, artistic director Reuben Reynolds III had several goals in mind, but none more important than showing the world what an outstanding chorus they have in Boston. This tour accomplished that and so very much more.

As ambassadors of gay marriage in America, the 125 BGMC singers were nothing short of celebrities during their stay in Berlin for the Pride Week celebrations. The chorus knew that performing in Berlin would be exciting, yet no one expected the level of adoration they would receive from the public, not only while walking as a group in the Christopher Street Day Parade, but also for hours after the conclusion of their first concert at the Haus der Kulturen der Welt. Built by the United States at the height of the Cold War, the Haus previously overlooked the Berlin Wall into the once communist east. That night the BGMC and its host choir, RoseCavaliere, filled the hall with songs of love and pride.

Steve Smith, executive director for the chorus recalled, “After many bows, Ruben sent the guys offstage, and I ran from the back of the audience out to the lobby. All the guys had left the stage but no audience appeared in the lobby. I ran back into the house and they were still standing and clapping to an empty stage … this had gone on for about four minutes. Reuben knew we had to pull another encore out of the hat, so he was yelling down the backstage stairs, “Get back up here!”

When ACFEA was first working on the BGMC tour, we knew the days in Berlin would be special. But to see 125 openly gay men onstage, underneath the Siegsessäule (Victory Tower), performing for over 700,000 people at the closing celebrations for Pride Week was beyond anyone’s expectations. There was also the additional honor of a personal welcome from Berlin’s mayor Klaus Wowereit. The chorus’ participation the following morning in the service at St George’s church was the perfect ending to an outstanding weekend of Pride. 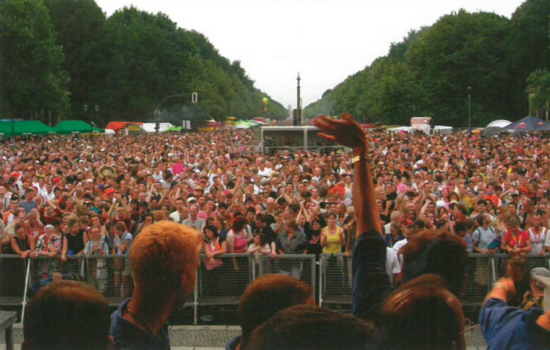 Though gay marriage is an issue the BGMC strongly supports, the chorus assumed a lower political profile for the next leg of its journey to Wrocław, Poland. The Boston Gay Men’s Chorus would be the first openly gay chorus to not only perform in Wrocław, but also in the entire country.

As Steve states, “After we arrived in Berlin, we heard reports that a gay pride march in Warsaw had been violent and that there were rumors of a protest brewing about our concert … [we] had no idea what was in store for us the next day.”

Despite the concert’s philanthropic purpose, to benefit a local organization that houses children with HIV/AIDS, the political atmosphere challenged the evening’s festivities with Wrocław’s Philharmonic Hall was threatened and, at one point, ticket sales were put on hold. With all of this swirling around them, the BGMC began its rehearsal only to be inundated by photographers, cameramen and reporters eager to get the group’s story.

Reuben and Steve spent most of the day – until the moments before the concert in fact – giving interviews about that evening’s performance to news crews from across the country. So it was with pride and renewed purpose that the BGMC gave one of its finest performances to exuberant applause. To add to this success, the BGMC raised enough funds to provide the HIV/AIDS programs with more than a year’s operating budget.

Upon arriving at their next destination, Prague, the singers were delighted to see their faces featured on posters adorning the Rudolfinum, whose grand nature and glorious history give any artist chills. The BGMC seized the opportunity to bring its message of equality to the city of Prague, joining with the Czech Gay Initiative to present at Concert for Partnership as its farewell performance. The success of the concert was even more fulfilling since just days before its performance Spain had legalized gay marriage, a step that the Czech Republic is still working towards. In the grandiose ambiance of the Dvořák Hall, BGMC sang with vivacity and purpose, surely filling the audience with pride and encouragement towards that goal.

During the farewell cruise on the River Vltava, chorus members snapped photos, celebrated and toasted each other. Through the Boston Gay Men’s Chorus set out to make a difference for others, they had also dramatically changed their own lives in the process.